The ongoing solo exhibition residue by Joseph Farrugia, produced by Marie Gallery5 at Bureau , Iniala, draws inspiration from Thomas Young’s Double Slit Experiment demonstrating how light and matter can display characteristics of both classically defined particles and waves. Whereas matter was assumed to consist of either particles, or waves, following the experiment the concept of wave-particle duality emerged. In Residue, Farrugia’s figures are reduced to unmethodical particles where attention is given to the space in between such particles rather than the completeness of the physical body itself. The presence of negative space defines the particles in their individuality, but also allows them to exist collectively, creating a new form that is present in a given environment. The resulting form is abstracted and veiled, mirroring Jung’s theory that one’s shadow is an integral part of the self. It is through the process of individuation and integrating the ‘shadow’ into the psyche that one can develop the individual from the universal.

The figures are described as ethereal, conceding a sense of fluidity in space and time. They exist in their singularity and plurality with their past and future selves in a fixed time that paradoxically stretches into the infinite. The exhibition therefore questions the interdependence between the physical and spiritual; addressing the nature of existence and consciousness, and of body and spirit. The quantum dimension of modern physics is extended to existential themes that resonate with modern spirituality.

“Science is about discovering truth, and explaining the ‘what’ of existence. Its major limitation is that it does not address the ‘why’ of being or how things are the way they are, which is the realm of spirituality. I believe that art can be a catalyst to bring the two together. This is not an entirely novel thought, as we find this constructive dialogue between science and art even in the renaissance, as happened in the application of perspective techniques, for example. In today’s world, science is making extraordinary progress in exploring the universe at cosmic level, most recently through the Webb telescope. At the other end of the spectrum, the marvels of the quantum world enable us to look and search inward and contemplate the nature of matter. I find that, even though I am certainly not a scientist, these discoveries inspire artists to look beyond what is, and to provoke questions about the nature of existence, even if such questions do not have definite answers. This is why art, science, spiritually and religion have always been at the core of human civilisation. ” – Artist, Joseph Farrugia 2022

“residue resonates with our past, present and future. The three works,’Liquid Time’, ‘Seated Presence’ and   ‘The Rhythm of Fading’  are touching upon the evolution of generations,  each generation is fading into the next leaving behind different traces of each person who has been part of this trajectory. ‘The Missing picture’ also touches on the feeling of sorrow and what our loved ones who are now gone, referring to sorrow and memories as the remaining residue left within us. Some of the works are left open to interpretation by the viewer however the collective creative process throughout the collection is an internal exploration of ourselves and what we each leave behind throughout our existence.” – Maria Galea creative director of MARIE GALLERY5

The ongoing exhibition is currently on show at Bureau Iniala in Valletta, which has been extended till the 31st of October. Opening hours are 9.30am – 5pm from Monday- Friday. For more information about the exhibition and the works visit : www.mariegallery5.com 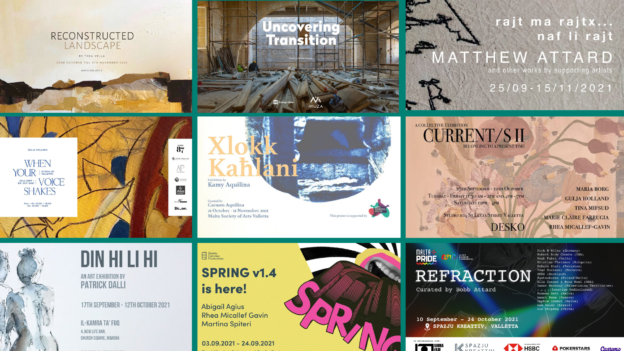 The streak has definitely been one of the highlights of the month, a retrospective exhibition showcasing over 89 works by the late Isabelle Borg. Isabelle…